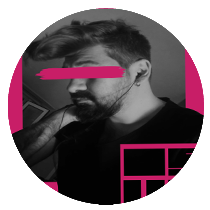 Tarık Uslu (aka Ustakun) chose a career in art later than some, having been heading in a different direction. He studied German language and literature, and enjoyed his job as a VIP guide and translator, but he realised his passions in life were art and design. So, he dropped everything to follow a new path at the age of 24. Tarik was obsessed with lego, drawing, comics, video games, action movies and animation as a kid and he has become a fan of typography, illustration and the Japanese style of minimalism as an adult. He has worked professionally as an illustrator and designer since 2012, specialising in posters and illustrations, alongside other artistic projects. Tarik's real strength lies in creating atmospheric, evocative scenes with his striking illustrations which would be perfectly suited to graphic novels.